Here are decoded lossless conversions of all sample ROMs for your sampling enjoyment: WAVs in ZIP

Regarding sounds and general information, you can check the awesome Ruskeys.Net website.
Also you can hear Лель ПСР drums in one my song - check MUSIC, listen to "Aerobika 1985"

One parallel digital to analog converter is used for all voices by multiplexing. It's output is then sampled and held by discrete analog components.
Afterwards, s&h output gets buffered and sent via two resistors into left and right mixbus.

There is one additional digital to analog converter that I call here "Volume DAC"
It creates a reference current for the waveform DAC. It is not used for "accent" - just the awkward linear volume adjustment, common to all drums. 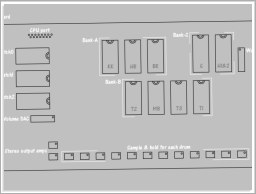 This sketch currently only shows waverom locations, s&h designations and a few other basic things.


Metronome Click (in realtime record mode) uses Closed Hihat wave, gated very short:
Beat1: 1.43mS
Beat2: 900uS
Beat3: 750uS
Beat4: 600uS
Gate time determines click volume.
Due to a firmware bug, metronome sound is offset by one quarter of a beat. Quite annoying.


Accent effect is made using analog mux right after stereo mix bus amplifiers (2x УД608). Analog mux is on the left lower side, chip К561КТ3. Accent bit (from latch1) gets inverted and bipolarized, and is connected to pins 6 and 12. Normal volume when +5V, higher "accent" volume when -5V.

Output sample&hold array is on the lower side of the board. There is one УД608 amplifier for each drum instrument. You can take individual outputs from pin6 of every s&h op amp. Levels and pannings (sends to L and R mix bus) are set via resistors located between op amps. Red rectangular capacitor is the hold charge storage of the respective s&h.
Refer to the drawing above for instrument s&h locations.
Individual outputs will have no volume accent effect as it is applied after mixing all sounds together.

Controller board CPU is extremely minimalistic 4bit COP402 with 2kbytes of program ROM and 2kilobytes of pattern ROM. Program ROM is on dedicated bus and uses address latch (К1533ИР23 located right besides "П64" ROM chip) for lower address bits A0..A7. All other chips and Pattern ROM "ТАБ" are on the other bus that is operated using general purpose IO.

CPU receives 4MHz clock and it internally divides it by 16 to make main system clock (used by everything else): 250kHz 50/50 duty cycle square.

Playback beat timing and update/scanning is maintained using classic i8253 timer chip - КР580ИР53. Timer chip generates two fixed rates - 25Hz on OUT0, 4kHz on OUT1 - and one tempo relative on OUT2. OUT2 is quite a nice find -- it is the usual MIDI 24 ticks per quarter note for the selected tempo. It can be used to make ЛЕЛЬ ПСР capable of MIDI Slave Sync. At 120bpm there should be 48Hz 50/50 duty cycle square. At 200bpm there should be 80Hz. You can calculate the required rate by: (bpm/60)*24

There is space for UART (DIP28, i8251) and optocoupler (DIP14 soviet classique) on the controller board for MIDI, but unfortunately firmware does not make any use of it. CPU never reads nor writes anything to/from UART. MIDI button on the panel is not connected (misses a diode) and does not do anything even when diode is installed.

Display driving is very simplified: It can only use 8 of 12 character spaces and only number digits 0-9 can be displayed. No letters, no dashes, no points despite microcomputer control - Thanks to the use of hard 7-segment numeric character decoder chip (К176ИД3).

User pattern+song RAM is made up of three 2kbyte RAM chips (К573РУ10). Each pattern takes ~32bytes, there are 64 user patterns and 8x 225step songs. Battery backup circuit is unreliable and SRAM chip driving has no provisions for safe power off. There is no power brownout detector and no masking of transient errorneous write control signals at power on/off. And, by the way, there is no way of bulk dumping/loading songs and patterns - no tape load/save or midi support. So the user pattern and song feature is just for the time the unit is kept powered on... While it may keep the data from batteries while powered off, it is in no way reliable or reloadable at data loss.

Firmware is comprised of two parts, each exactly 1kbyte. This is due to the fact that CPU cannot address more than 1kbyte, so a large program requires paging / bank switching. Paging system here is made up of a single bit latch. It can be set or reset via software routine to transcend to other page within two cycles. Lower part of the program does key readout and display mode logic and sample playback triggering, while upper part does display scanning, pattern position counting etc. There is space for additional 2kbyte program rom and it had some bank switching support.

Here's a quick try at disassembling Лель ПСР firmware:
Lower bank program: disassembly in TXT
Upper bank program: disassembly in TXT
I wrote a straightforward COP402 disassembler for it and it also adds some automatic comments where such could be helpful. Instruction set matches COP402 datasheet and MAME project emulator's one. I don't know of any COP402 assembler as well as any of it's oddities and number formats, so I just used $ for hex and % for binary strings, as well as ; for comments.
After taking a peek at the code and doing visual sanity check you may think that there must be a truckload of mistakes in the disassembler, as jump opcodes, asm lines and comments seem messed up. But no - it's a mistake to do a sanity check on 4-bit weird ass thing like COP402. Yup, jumps are all funked up and different instructions work differently from different address areas.
And yes, a lonely "x" is an official full instruction mnemonic.
If you have programmed on COP400 series please help with commenting the code.
I will also do some execution trace capture and analisys on the actual system just for fun. Results might be helpful in understanding i/o routines, conditions and branches.
Lower bank program is the one located $000..$3ff and upper bank is $400..$7ff.

For some weird reason, nobody else seemed to have dumped the roms from this popular soviet drum machine. Or maybe, somebody had made rom dumps, yet after spending hours desoldering just didn't want to share them for free. So someone had to do it and share them with you :)

And finally - here they are!

Twelve ROM chips from a working drum machine, all carefully soldered out one by one.
All 2kbyte DIP24 chips in it are 27c16 compatible, and the 8kbyte one is 27c64 compatible.

Waveform ROM filenames have one or two letters after an underscore, that match the ones written with paint on the original chips.
SAMPLE_G: Likely meant "Гонг", ride cymbal.
SAMPLE_KK: Likely meant "Каубел" and "Клап", cowbell and clap.
SAMPLE_T: Tom 1-3.
and so on.

Refer to the "sound module board map" picture for ROM chip location on the pcb. Factory and original design IC position numbers are unknown due to the lack of any silkscreen print.