This article describes basics of fixing soviet soviet electronic organs: Юность, Юность-16, Юность-70 and probably some other as well.

The one I have is about 43 years old. Surprisingly enough, it still (mainly) works!
Due to it's thick full metal body and high internal currents and voltages, it is rather insusceptible to RFI or any radio..light..xray waves for that matter. It is surely able to withstand direct hits from a shotgun, end probably was designed to withstand a bombing.

There are no CPU, DSP or any silicon chips at all. Only a bucket of germanium transistors and diodes.
System consists of a power supply, vibrato LFO generator and tone boards. Some of the organs have also a built in amplifier and a speaker.
LFO is extremely primitive, but, to my surprise, generates a rather smooth sine.
Tone generator board array consists of twelve identical boards, each having a reference oscillator and five octave dividers.

Regarding sounds, you can check the awesome Ruskeys.Net website. 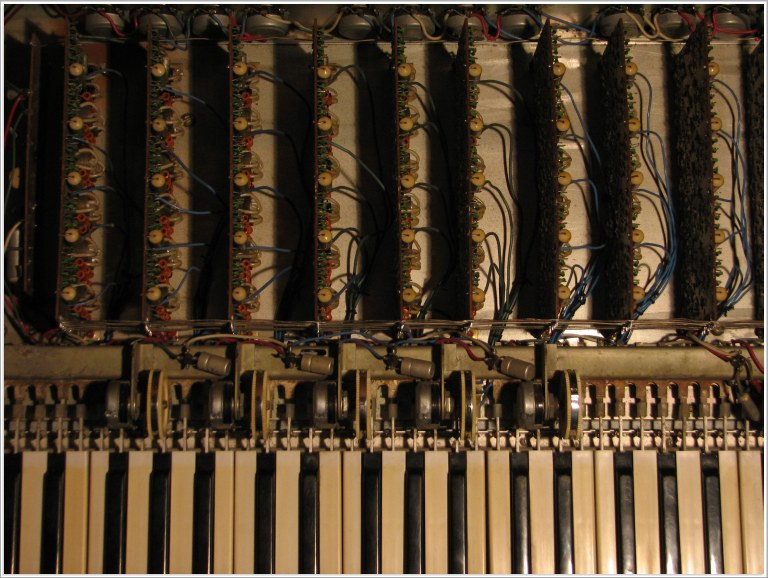 Check the power supply. It supplies only one voltage (that's good) for entire organ - -12V. Please note that (unusual for nowadays technology, but rather typical for 60-ties/70-ties) everything is below the ground (i.e. GND is the most positive point). Output voltage should be stable and clean. If voltage there is closer to the ground (say, -4V) then disconnect PSU from the rest and check what happens. If (after disconnection) voltage gets to the required (-12V) level, then something might be shorting the supply rail, or PSU has become too weak for some reason. If not, then the power supply is faulty. If output has 100/120Hz waves on it, then some of the large caps or rectifier diodes in the PSU are likely faulty.
Check what is going on on the tuning pots (the rear side of the keyboard). Two of the pot pins are connected to the ground, and the 3rd pin has a wire going to the respective tone board. There should be reference oscillator wave on this pin at all times (no need to press any keys). Set vibrato depth wheel (first one on the panel) to zero and see if waveform is stable distorted combination of triangle and square. Tune the pot and see if things change. If there's nothing, then reference oscillator of the respective soundboard does not work.
If all else works, now check the timbre/tone wheels on the panel: second to fifth should smoothly change voltage 0..-12V on the four respective tone board common wires (the ones which are the closest to the keyboard, uppermost pack of four). On the lowest setting ("0") of the respective wheel, control voltage should be around -12V; on the highest ("9") it's around GND. If it works, set all of them to the highest position ("9").